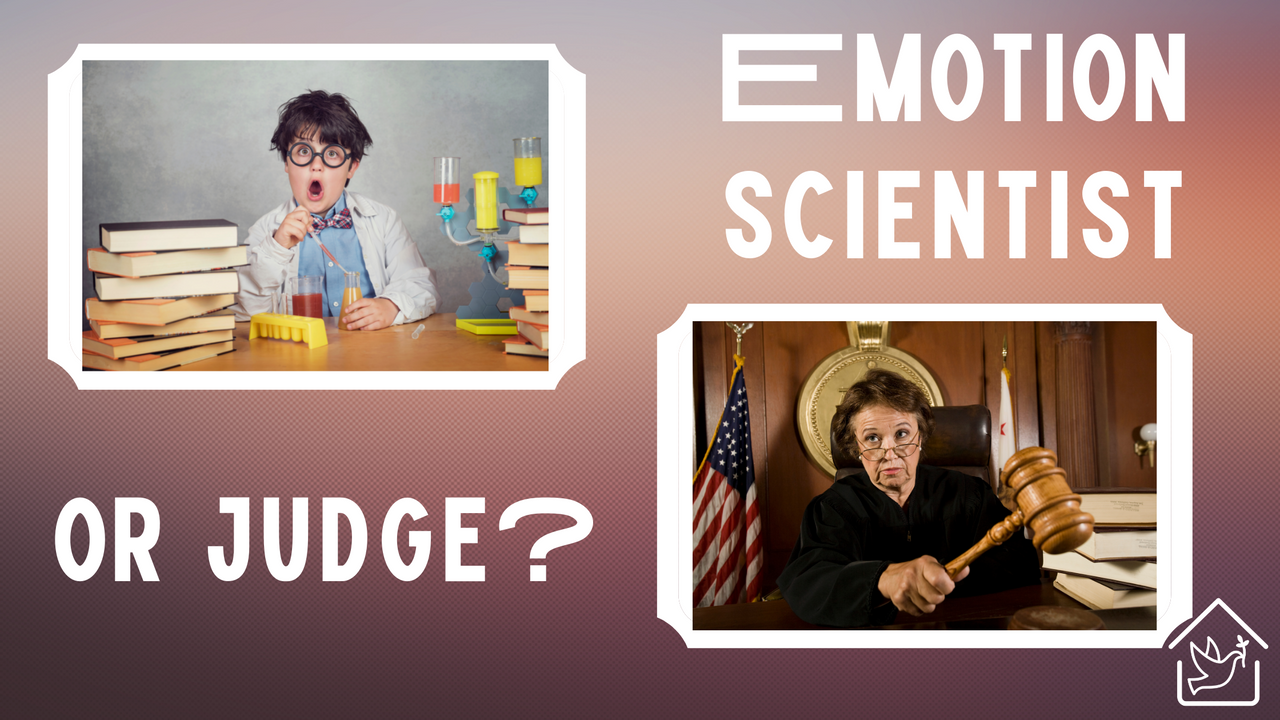 I am a huge fan of Judge Judy Sheindlin. For many years she was my reason for folding laundry. I looked forward to that huge pile of laundry on my bed so I could turn on some of her episodes and "educate myself" about the legal system. To be totally honest though, I loved watching the people. I wanted to see what she saw, hear what she heard, and know how to ask the right kind of questions to find out the truth of situations.

Another favorite television show of mine was the good old original CSI. My husband and I would watch the episodes each week together. We got caught up in the storylines, the characters, and the entire 'almost all real' science behind each episode.

After years of watching these types of shows, I would like to consider myself an expert scientist or judge. But here's what I've recently learned.

When it comes to the behaviors and emotions of myself and loved ones, there are definite benefits and drawbacks to being a judge or a scientist.

We all love judging. Our brains love judging. Judging situations are totally necessary for us to live and thrive as a society. We judge if our hot chocolate is too hot, if the weather is cold enough for a jacket or coat. We judge job openings we apply for and how important tasks are that we have on our to do lists. We have to make judgment calls when it comes to friends, spouses, and employers.

Scientists have a pretty great role to play as well. They look at things from an outside point of view. Instead of judging only what they see and hear, they stay unbiased and look for clues to solve mysteries and get answers.

When we look at our emotions, do we look into them from the judge or the scientist point of view?

A scientist will see what we feel, do, and say and analyze where our emotions are coming from and why they are there to start with. Scientists ask questions and look for hidden clues and answers. They resist making quick judgements until all the evidence has been collected and evaluated. Sometimes their evidence supports their conclusion and sometimes it doesn't.

If we take on the role of an emotion judge, we like to judge based on what we THINK we should be feeling, doing, or saying. We use ideals that we've seen, heard, or been taught by others. We think we need to follow and compare ourselves to those ideals. If we're thinking, feeling, or second guessing ourselves, we are comparing ourselves to what we think the standard is, not what we truly are. Often I'll ask my clients, "Who told you that you are "supposed" to be thinking, feeling, or acting a certain way?"

The people who have the best emotional health will look at their emotions from a scientific point of view. But that's hard when you're as good at judging as most of us are.

In his book Emotional Intelligence, Marc Brackett tells us that, "You could be brilliant, with an IQ that Einstein would envy, but if you're unable to recognize your emotions and see how they're affecting your behavior, all that cognitive firepower won't do you as much good as you might imagine. An emotion scientist has the ability to pause even at the most stressful moments and ask: What am I reacting to? We can learn to identify and understand all our feelings... and then respond in helpful, proportionate ways."

An emotion judge is a person who is quick to label others emotions or dismiss them without figuring out what's behind their reactions.

Brackett estimates, "that the world is likely filled with far more emotion judges than scientists because it’s much easier to quickly make assumptions about someone else’s feelings than to investigate and figure out what the underlying problem really is."

Last week one of my teenagers seemed really tense. He was reacting really harshly towards his siblings and seemed very very upset. My emotional judge automatically came right out and labeled him as grumpy, difficult, emotional, and self centered.

But after I mentioned these judgments to my husband I could feel something was not quite right. It seemed to me that I was missing something in these descriptions.

I realized that I had been playing the judge instead of the scientist.

Why was he so emotional? Why was he acting more grumpy than he normally would? Was there something going on that caused him to seem more difficult?

When I started asking myself these questions, I realized that I didn't have enough evidence to judge. I was judging him based on how I thought he should be acting from my point of view.

But who says my point of view is the correct one?

I realized I needed to do some research to find out what was really going on. I sat by him on the couch and carefully, lovingly asked him some questions about what was going on in his life. I listened and gathered information. I didn't make any quick assumptions or come sailing in with my opinions and expertise.

I listened and asked questions for a long time. We ended up moving to a more private space to talk more and I learned about what was going on in his brain. He shared with me some very deep fears and struggles he was having.

After taking a moment to empathize with him and let him know I loved him and would support him no matter what, we were able to end on a positive note. I felt more connected with him. I understood where he was coming from. I had gathered information and was able to make a much less biased, more kind, compassionate, and loving judgment.

The judgment I had made before was unfair, unkind, and frankly, wrong.

I was so grateful I took a moment to actually listen. The scientist role created a loving conversation that strengthened our relationship.

Find opportunities to switch from your judge to your scientist role with your children. They need to feel understood, connected, and loved. Those feelings don't come from a judge. They come from someone who really sincerely wants to know who they are and what challenges they are facing.

I would love to help you find and utilize your inner scientist and become the best parent you can become!

Get my 30+ powerful coaching resources exclusively for my newsletter friends

We hate SPAM. We will never sell your information, for any reason.

Join Me On Social Media!

Free 30+ pages of my most powerful visual aids! 📚

🥳 I send new pages I create exclusively to my newsletter subscribers.

One email a week, no spam, easily unsubscribe at any time!